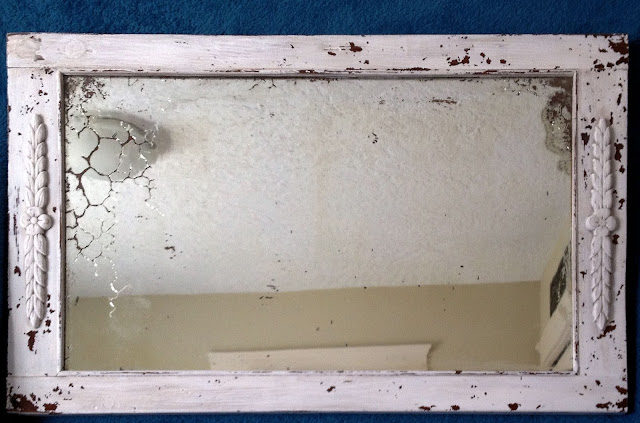 At my favorite Salvage store I discovered this old cabinet door. Actually there were two. One was in great condition (not my cup of tea!) and the other door the mirror was distressed and yellowing (Score!). It was only $12. I was so excited, couldn't wait to do this project.

So what to make out of a mirrored cabinet door? Well, a mirror of course!
I know that it doesn't take a whole lot of creativity to come up with that. But sometimes these salvaged finds only need a little bit of a helping hand to be something "new" and useful again.

Unfortunately I didn't take a picture of the whole door before I got started. Too anxious to get going! 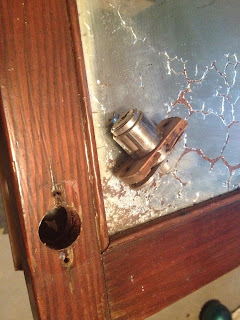 The door had some hardware that I had to remove first. Namely a keyhole and some other bits that I discovered when I trimmed the one side to match the other. (The bottom was taller than the top. But I was going to be using it horizontally so I wanted them even). 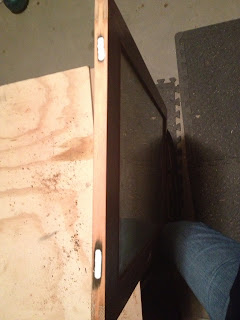 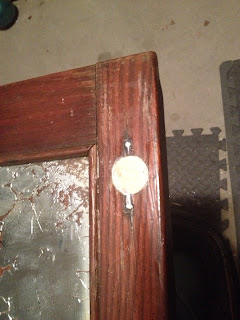 Once I removed the hardware, I filled the holes left by them with modelling paste. Its all I had on hand, and it is paint-able as well. Normally I would use wood putty, but I didn't want to run out to the store and this did the trick just as well. 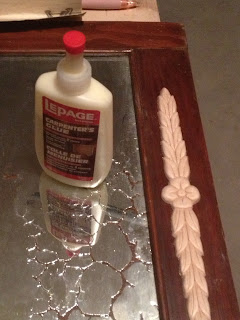 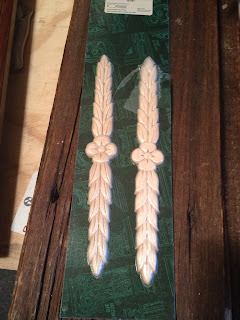 I had bought some ornamental wood moldings from my local Home Depot ($7), and glued them on each side to add a bit of interest. 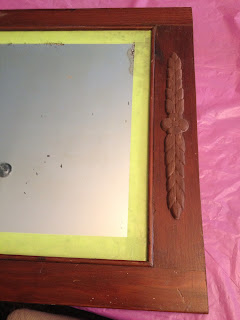 I then painted the moldings, and the side that I had cut, a brown color with some inexpensive acrylic craft paint ($1) in a shade to closely resemble the color of the door. I then taped off the mirror for the next step. 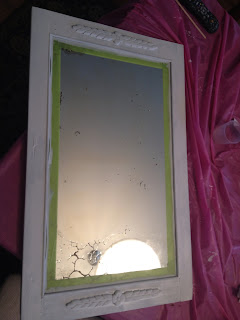 I used "Miss Mustard Seed's- Milk Paint" in "Ironstone" over the whole piece. I knew the moldings wouldn't chip or peel with the paint because that wood wasn't sealed, but I was hoping the rest of it might. It didn't. It just didn't want to co-operate with me on this one. So I used my method (See my earlier post "Milk Paint tips") to get some chipping. I also sanded down the white paint on the edges and on the moldings just a bit to reveal some of the brown craft paint underneath. 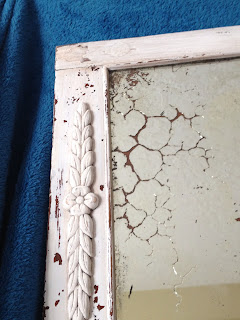 I then sealed it with "Miss Mustard Seed's- Antiquing Wax" on the moldings to bring out the details and in some random areas to help age it. Then "Miss Mustard Seeds"- Clear "Furniture Wax" over the rest of it to protect it.
Added some hanging hardware. And Voila! My $20 "Antique" mirror was complete! 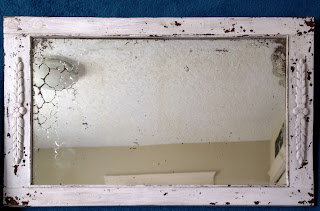