You know you are old when....you can remember telephone benches,
or so my 18 year old son tells me.
I actually had to explain to him why they were called that. So for any young people out there, a telephone bench had a table part for the phone to sit on and a bench or seat for you to sit on while you talked on the phone. We didn't have cell phones yet of course, but believe it or not, we also didn't have cordless phones at that time so you couldn't just take it and go sit on the couch to talk.
But these benches can still be quite functional pieces of furniture.
Here is a picture of the one that I found: 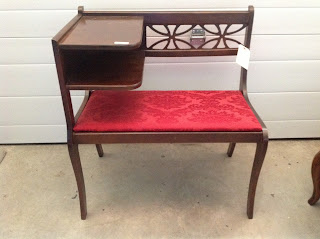 Really not bad looking but the seat had absolutely no padding of any sort. Unless you count three layers of fabric. I could have just re-upholstered the seat but where is the fun in that.
So first I removed the seat and started removing the fabric. First layer is the red you see above,
It was no small feat to remove all of the fabric, as they had been fastened not with just with staples but lots of small tacks as well. The tacks had heads that would snap off when you tried to remove them. It took pliers, cutters and a flat head screwdriver to get them out and each layer more than fifty of them. All totalled there were 162 tacks & staples. (Yeah I counted, it gave me a sense of accomplishment.)
Finally I glued on some 1-1/2" foam, wrapped it with batting and then covered it with a lovely linen blend fabric with the names and pictures of famous Paris landmarks printed on it.
(I used staples..... Just sayin.) 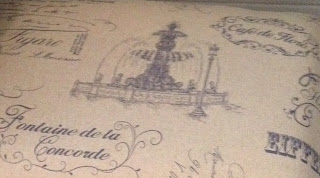 The bench itself I painted with a pale grey latex paint that I had added "Paint Minerals" to. I love this stuff it makes the latex paint just like "Chalk Paint" at a fraction of the cost and in any color I chose. 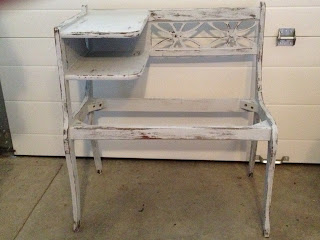 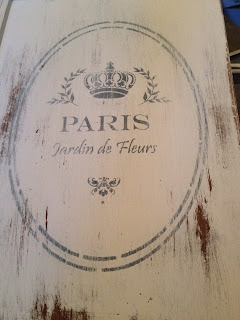 Distressed it, antiqued it and sealed it as well. 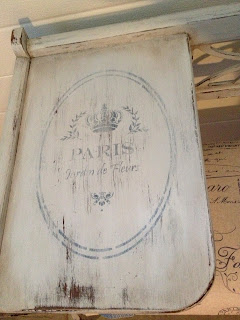 Finally I took a basket that I found at "Homesense" which was almost the same color blue as the print on the seat fabric and I removed the lid and the liner and placed it on the shelf. It fit perfectly. 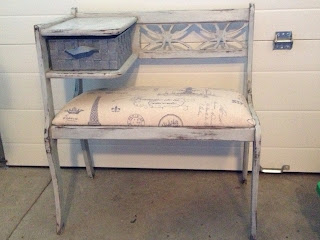 This bench sits in our front hallway and still functions as a phone bench. Only now the cordless home phone charger will sit atop the table and the cell phone charger cords will be tucked away in the basket. As for the seat, it's always nice to have somewhere to sit and take your shoes off.